Vicom has been one of the most amazing multi-bagger in the Singapore stock market. It was trading at 50 cents 10 years ago, with a market cap of S$150m and over just one decade, it became a $5 stock with a market cap of S$500m, generating S$30m of free cash flow per year on a revenue of S$100m and piled up another S$100m of cash on its balance sheet. Despite such a huge run, I took a look at this stock again and believe we can still squeeze some juice out of it. In fact quite a bit of juice especially if some of the optionalities come true.

Vicom is Singapore's leading testing and inspection company with two core businesses. The first is the vehicle inspection business which it has 70% market share across 7 inspection locations in Singapore. For car owners, we know this all too well, as we need to bring our vehicle to these dreadful places every year and get charged $60 for some 20 min routine work which doesn't seemed clear to us why it needed to be done except to satisfy the regulator.

The second business is industrial testing and certification which is done by its subsidiary SETSCO which provides calibration, testing and certification services to various industries. The important ones being construction, oil and gas, aviation. This business makes up 2/3 of its sales but only c.40% of its profits. There is some cyclicality in this business as industries grow or falter with global trends. In the recent years, the slowdown in both the construction and oil and gas sector had impacted earnings.

So, now that we know more about Vicom, what's the story or rather the investment thesis? The investment thesis is the reason why we want to invest in some company and it should be simple enough for primary school kids to understand. So here's the version for Vicom.

Vicom is a stable, cash generative business (6-7% free cash flow yield) that is under-appreciated by the market. There is floor on its stock price underpinned by its strong cashflow and dividend but yet there are optionalities that would help boost the stock price even higher if they materialize. Vicom is also part of the ComfortDelgro group which might to take it private someday.

The stock market represents the view of all the investors and speculators and they tend to focus on the obvious and the recent events. The consensus view on Vicom is that there are now less cars on Singapore roads and most cars are brand new luxury cars then do not need annual inspections. (Only cars more than 3 years old require annual checks). Since c.60% of its profits come from vehicle inspection, so the stock is not interesting. The other business, as we discussed, is facing headwinds in construction and oil and gas. So, no story. This is why the stock did nothing for the last three years. Its stock price just hovered between $5.5 to $6 since 2014. 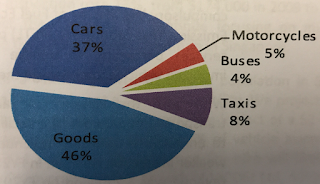 Cars are only 37% of Vicom's vehicle inspection business


However, astute investors, we dig deeper. We think at a higher, second level. The pie chart above shows the breakdown of inspection by vehicle type and as you can see, passenger cars only make up 37% of the total pie. The rest of it shows that 63% of the volume actually comes from commercial vehicles which require much more regular inspections. This is the reason behind Vicom's stable cashflow. Inspection is a recurring business. Taxis and buses are required to be inspected every 6 months and goods vehicle annually. There is some volatility due to the economic cycle but by and large, I would estimate that 40-50% of Vicom's overall revenue is very stable. This same argument can be made for its industrial testing and inspection business.

About 15 years ago, this stock was undiscovered as it was too small to matter to most global investors. It also only had the vehicle testing business since it had not bought SETSCO. But when SETSCO came in around 2003, the picture changed and investors took a few years to realize the beauty of its businesses. But still, for the next few years (2005-2009) it was still trading above 10% free cash flow yield. Over time, ultimately, it got bid up and is now at 6% free cash flow yield.

This strong recurring cash generation capability is what underpins the stock price and hence it is very unlikely that it corrects a lot. To add more colour, Vicom's assets are all fully depreciated, these centres do not need capex, nor much labour, nor marketing or other expenses. Hence the $60 that we pay almost drops directly down to its net profit. That's why Vicom stopped reporting gross margins. But when it did report last time, it reported gross margin it was 96%! That's back in 2013. Today we know that its operating margin is still 30% which had stayed almost unchanged for the past 10 years.

Given such strong cash generation, it has to pay them out or else it would just drown in cash. Actually, it's somewhat drowning in cash. Despite paying 4% dividend annually, the firm amassed S$100m of cash over the years which is 20% of its market cap. They might have to do a big special dividend or something to clean this up. Needless to say, Big Brother ComfortDelgro would probably want it to uplift some of this cash given that its taxi business is really not doing so well and Big Brother really don't mind having a bit of that S$100m buffer.

So even without discussing further, we know that Vicom is a huge cash machine that we can get at 6% free cash flow yield of which 4% comes back annually as dividends. On conventional metrics, it is trading at 16x PE but if we strip out the cash it is actually more like 13x and EV/EBITDA is a reasonable 10x. In today's world of negative interest rates and low returns, these multiples are really not expensive for such stability.

Email ThisBlogThis!Share to TwitterShare to FacebookShare to Pinterest
Labels: Vicom