Once in a while, it's worth doing some interesting stock taking to see rankings, compare charts and tables just to take note where things stand. Today, we want to look at SGX's biggest and smallest, just for the fun of it. We did a partial exercise like this a long, long time ago. Back then there were 700+ stocks listed on SGX. Today, as things stand, we still have 700+ and as per previously, most stocks are not investable for various reasons. We shall look at them later. 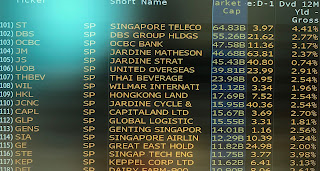 The first table looks at the best and the biggest of our beloved little red dot. Singtel, at S$65 billion market cap is the largest local company. Singtel has been the largest since forever and looks like it would remain so with #2 DBS almost S$10 billion away. Although we could argue that the Jardine Group could be bigger if we add all their companies together. At its peak, Singtel hit S$70 billion and we would likely see it exceed that as long as Singapore continues to grow and its overseas subsidiaries continue to churn out cash.


Next we have DBS and OCBC and further down UOB making up nearly S$150bn in market cap. The banks and property companies (further down the list: Capitaland, City Development, Ascendas etc) had always been a huge part of SGX and would remain so given our status as a financial hub. What's more interesting is the Jardine Group. Amongst the top 15 names, Jardine Group occupies four slots from Jardine Matheson and Strategic in the infamous binary structure, followed by Jardine Cycle & Carriage, Hong Kong Land. In the next list we also have Dairy Farm, the retail giant and the firm behind 7-11, Guardian, Cold Storage and Ikea.


Then we have the others, a group of interesting companies from Thai Beverage, Wilmar, Genting and some State Owned Enterprises or SOEs (ST Engineering, Keppel, SIA etc). Interestingly, the SOEs provide the highest dividends as they are also being perceived as slower growing. Singapore, by and large, had become a very dividend focus market with the top names all providing decent dividend (except Jardine Strategic which is tied in the binary structure). The next set of names (below) provide even higher dividends with REITs and telcos leading the way - Starhub at 7% dividend! 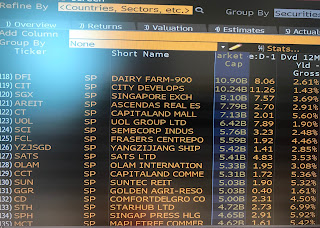 
To me, this list looks more interesting as there should be room to grow at single digit market cap and some names here have been highlighted a few times on this infosite: Sembcorp, Dairy Farm, SATS, SIA Engineering (not here but in the next set of names ranked by market cap - truncated and not shown on this post). The REITs would also look interesting at 6-7% yield. However do also avoid some companies that had already shown to be problematic: Olam, Comfort Delgro (getting killed by Uber and Grab) and SPH. 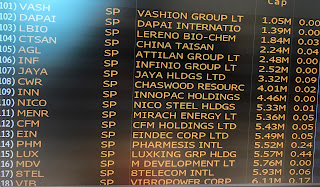 Smallest of them all!


Finally, we have the list of the day, the smallest on SGX. The smallest stock listed apparently only have S$1m in market cap, which is very likely smaller than the net worth of some readers here (definitely so if you own a private property!). It's a mystery why some of them are still listed. A lot of names were the once infamous S-chips. Most do not pay dividends, nor have profits. I would just say, don't bother researching them, there are enough other companies to do work on.

There is this name though that caught my eye - Luxking Group. This is also one of those S-chips and surprisingly, it had generated positive free cashflow for the past 6 years. In 2016, it churned out S$4.5m in free cash while it's market cap is $5.5m hence implying a phenomenal 80% FCF yield. Unfortunately, I know next to nothing about this firm and just by looking at its financials, it's really hard to make a call to say this is an okay business. Even if we determine it's okay, liquidity is too low and it's not really traded, so in short, it's hardly investable. Nevertheless, if anyone here knows more, do share!

Next post we shall look at education (again!) as highlighted in PM's NDP rally speech!