The annual high dividend list is here! This will be the first list for 2017 with a second list coming out closer to the end of the year so as to shorten the waiting time for these highly popular lists. Over the years (this is the 8th year), these lists had become an attraction of its own, drawing lots of traffic for the site. Although the rest of the stuff is actually pretty good! :)

Final Fantasy, one of the most popular game series in the 1990s and 2000s might be an analogy that some readers could relate to. The game is in its fifteen reiteration and every series features a few beautiful computer generated female leads that had captured the attention of the male game players. Somewhat like what the dividend list is trying to achieve for this site. Haha! Anyways, the female lead for the latest reiteration is captured below. 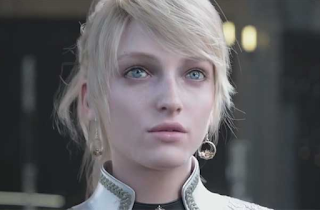 It's been difficult to screen for good names in the last few years given the conditions of the markets. As interest rates declined globally into negative territories, the global hunt for yield had affected bonds, property and stocks. It has become almost impossible to find good and high quality bonds giving decent interest income, meaning at least high single digit coupons. In today's markets, only crap companies that cannot find capital come out to ask for money and pay out 6-8% interest to some gullible investors. Meanwhile, good firms can borrow at low single digit interest rates or maybe no interest at all! In fact, Nestle short term bonds pay close to zero interest and at one point traded at negative yield. So, just to reiterate, bond yields had collapsed big time. In property, we see the same phenomenon as rental yields get compressed. In Singapore, good properties are now selling at 2.5-3% rental yield when it used to be able to go to 3.5-4%. Gone are the days when we could buy good nice condos below $1,000 psf.

As for stocks, again, it's the same story. We used to be able to find great companies having dividend yields of 4-5%. Today, we would have to settle for 2.5 to 3% which would be pretty good already if the companies are world-class and strong cashflow generators. In the past, the dividend list just focused on Singapore but we would only see a handful of names which doesn't really make up a list. Hence the list had since gone global a few years ago and this current one has 55 names. Again, the criteria for selection hasn't changed much over the years. We are mostly screening for consistent free cash flows, dividends, margins and ROEs. The first part of the list is attached below.


We see some familiar names in this first part/tranche with some international names like Symantec, Vivendi and Mattel, companies with partially outdated models trying to transition in the new economy. This happens a lot with quant screens and hence, in the end, it pays to really dig and really understand the fundamentals of businesses. As for the Singapore names, we see a few this time: UMS (which we discussed last year), M1, Mapletree Industrial Trust, Silverlake Axis, Ascendas India and Yangzijiang. I would comment that there's nothing interesting here. REITs are tricky giving the upcoming interest rate hikes in the US and shipbuilding is too treacherous. Silverlake Axis could be interesting but there might be some corporate governance issue which was flagged out by a short seller report last year. M1 - well, it's going nowhere, Singapore doesn't need four telcos...

The second part of the list (below) sees a few tobacco names which had also appeared regularly. Tobacco stocks are usually screened out because they churn out huge cashflows but yet trades at a discount because some large and reputable investors tend not to invest in these stocks given the damage tobacco had done to humans. Tobacco is the single, largest cause of human deaths in the history of humanity. However, as with all things in life, the only constant is change and we might be at the cusp of a revolutionary change in the tobacco industry.

About 16 months ago, Phillip Morris, the world's largest tobacco company (well actually there are only four big listed ones and they are almost as big) invented a new kind of cigarette which uses a high tech device to heat tobacco leaves instead of burning them. Without burning, the smoke content with smoking is reduced to virtually zero and second hand smoke is eliminated, although there is still a bit of the smell. But the biggest value proposition is this - it reduces the toxicity of tobacco by over 90% and the firm postulates that in a few years, traditional tobacco products will be gone. If this happens, tobacco becomes more like alcohol (still a vice but much less harmful) and deaths by smoking would be reduced dramatically. Millions of lives would be saved. This is a game-changer.

Phillip Morris first launched its product called iQOS in Japan last year and it became a huge success, garnering 10% market share in one year and the rest of the big tobacco firms are scrambling to come up with competing products. If this trends continue, we really might see the end of traditional smoking and big and ethical investors can buy tobacco again. Tobacco companies would at least double just based on its valuation expansion. And this would be good valuation expansion from low teens PE to high teens (not your 40-50x PE). So, this is really major although we are probably seeing the change in terms of decades rather than years.


This second tranche also has a few good Singapore names such as Singtel, SGX and ST Engineering. We will dive into more about STE or ST Engineering today. This is an interesting name to look at in today's world given its business in defense. The world has become a more dangerous place in the last few years with the war in Syria, North Korea getting more belligerent and China exerting its military power. ST Engineering boasts 30-40% of its earnings from defense, albeit mostly for the Singapore government, and hence should stand to benefit from this trend.

The other part of its business is similar to SIA Engineering's aircraft maintenance which had seen a few years of poor conditions as new airplanes were introduced and maintenance requirement cut but the industry should be poised for a rebound and again ST Engineering will benefit from the recovery. This is a company that had consistently generated a few hundred million dollars of free cashflow annually over the years and trades at 4% FCF yield which it pays out 2.5-3% in dividends. Alas, the stock gapped up about a month ago and we might need to wait a while to get it at a reasonable margin of safety.

Finally, let's talk about the last portion of the list. The last tranche has quite a few good value/quality companies like Coca Cola, IBM, both Warren Buffett's holdings and Coach. This luxury bag name had been undergoing transformation in the last few years as its customers moved away to newer brands like Michael Kors. But Coach does have a strong tradition and in luxury, having that is a big, big plus. You can't get Audrey Hepburn to have breakfast at another jewellery store today or get Neil Armstrong to wear the Apple Watch to the moon. Luxury is about telling unforgettable stories. Coach had less of that super marketing legacy but with 75 years of history, it's still a force to be reckon with. In the worst case, some big boys like LVMH or Gucci would simply buy it out if it gets too cheap.

In Singapore, we also see old favourites like SATS and Boustead again as we lowered the dividend cut off to 3%. Alex Huntgate had done a great job at SATS in the last few years and needless to say, FF Wong's 20 year legacy at Boustead continues going strong! So, that's about it, we shall screen again in the later part of the year and do check back for more!