After Rolex, we have to talk about the world's most coveted watch brand: Patek Philippe. Or just PP or Patek in short. Meanwhile for those who are here for the first time, this is actually part of a bigger analysis on Swatch. Do read from the first post.

Patek Philippe belongs to the few exquisite Swiss watch brands in the world of high horology, which is a chim (difficult) word for timekeeping. To borrow an avid watch lover blogger's words (again): some of these brands in the uppermost echelon of the watch world are spoken with hushed reverence. In my interpretation, it probably means they exist solely to perfect the art of watchmaking and nothing else.

This is a ranking of the top super luxury brands that I found randomly using Google:

What is meant by perfecting the art of watchmaking? Well, some of these watches are designed with multiple grand complications (very difficult movements) such as the perpetual calendar (a watch that can tell the date, day accurately for 100 years, taking into account of leap years), the minute repeater (a watch that can tell you the exact time by chimes) and the chronograph (a mechanical stop watch, which doesn't really meet the grand complication hurdle but never mind), just to name a few.

The more complications, the more difficult it is to design a mechanical watch. Brands like Patek Philippe, Vacheron Constantin (VC) or Audemars Piguet (AP) take pride in their ability to design and integrate complications into their watches. Whereas Rolex appeal to the masses and the mass affluent with stories of human triumph, simple and useful innovation and popular conspicuous designs, these super luxury brands impress with their wilfulness in achieving perfection.

For most Earthlings, it doesn't really matter if a watch can keep a perfect calendar for the next century taking into account leap years or chime 11:59 PM soothingly but for these top echelon brands, this is their pursue of excellence. It's not about usefulness or utility, it's about creating impeccable masterpieces. Obviously there are people who do appreciate and are willing to pay for such works of art, mostly UHNWIs or Ultra High Net Worth SIngaporeans who also happen to like to buy overpriced shoebox apartments.

As with other artform, there are a few attributes that are common amongst these brands such as a long history (Vacheron Constantin was established a quarter millenium ago), rarity - every model is produced in very limited quantities, usually only a few hundred, and originality - most of these brands do not import any movements or components but take pride in producing almost every component in-house. As such, some of these upper echelon brands have actually been "downgraded" as they now belong to bigger groups (Blancpain and Breguet are owned by Swatch Group) and hence are deemed to have lost that original touch. Although this doesn't seem to apply to the said Vacheron Constantin, which is now owned by Richemont.

But why does Patek stands out above the rest? Shouldn't those that are still independent (basically PP, AP) be as good? I would attribute Patek's success to three reasons:

a. Marketing
b. Ingenuity
c. Luck

Without a doubt, Patek is one of the most powerful marketing machine mankind has ever seen. With taglines such as, "Begin your own tradition" and "You never actually owned a Patek Philippe, you merely look after it for the next generation" etc, you have to give it to them. Like we discussed in a previous post on property, how do you put a price to a family heirloom? It's supposed to be priceless! 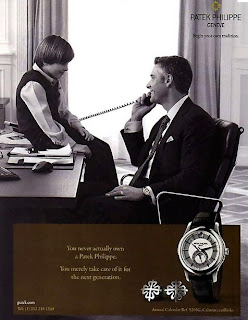 Building on this, Patek goes out to hire famous fathers and sons to appear in their commercials, further enhancing the marketing effect. Not to mention, the controlling Stern family own father and son are true to life examples of its own marketing belief. Hence all the more people buy their stories and their watches!

But, Patek's marketing is more ingenious than that. It is believed that the firm intricately strategizes its launches and production of models such that their rare watches will do well in auctions. They make only 200+ models and 50,000 watches every year ie on average, some models can have only 250 pieces in existence! Although most popular models should go into thousands of pieces. PP is also known for its sudden announcement of production cuts for popular models such that these models will then subsequently fetch exorbitant prices in auctions.

Furthermore it has its own museum which participates in auctions to re-acquire their old watches, brush up their stories and re-market to the world, again enhancing the inspiring tales of their traditions. Its own museum had also successfully created some record prices in the past.

No other brands come close to what Patek has done with its marketing and its auction strategies. Of course, this has invited speculators as well as the criticism of honest watch lovers, some of whom then tend to favour others that remained true to just making really, really good watches.

That is not to say Patek is inferior in technology. Amongst the trinity as it is known in the watch world (Patek Philippe, Vacheron Constantin and Audemars Piguet - PP, VC and AP), Patek is still the one that has best history of innovation (though far less than Rolex, a lower ranking brand in this aspect). The most important being the perpetual calendar, which PP invented. Its minute repeater is also perhaps the most intriguing and produces the nicest chimes which contributed to its popularity.

Patek has persevered in its marketing and ingenuity since 1851, capable employees in the firm making things happen, esp so in the last 30 years. The last piece of the puzzle I believe is simply Lady Luck smiling. With the Queen of England publicly expressing fondness for Patek and the Popes of the past owning Patek's timepieces and the famous story of Henry Graves winning the bet on making the world's most complicated watch which was commissioned to PP, luck has undoubtedly also played a role in Patek Philippe's ascent to the No.1 coveted brand in Swiss watches.